"Old batteries are not simply thrown in the trash" 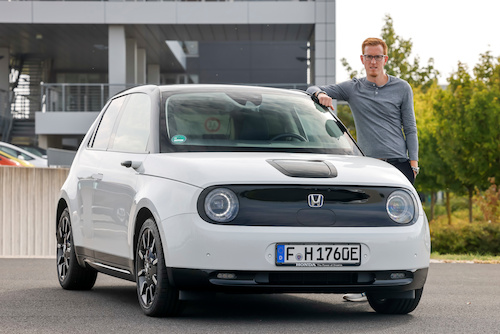 If you take into account, for instance in Germany, the electric car purchase premium (German government/manufacturer) as well as the innovation premium of the German government, many e-cars are already significantly cheaper than comparable combustion cars. A recent study by PwC also shows that e-vehicles in the compact and mid-size classes can expect a cost advantage as early as 2024, even without subsidies. Furthermore, e-cars benefit from more favorable maintenance than comparable internal combustion vehicles, thanks to low maintenance and fixed costs as well as low loss in value. Calculations by the German Automobile Association (ADAC) also show that electric cars are increasingly outperforming vehicles with internal combustion engines when all vehicle costs are taken into account.

Currently, we keep hearing about delivery problems for electric cars. Do I really have to wait months for my new car before I can drive it?

It is true that a large number of electric cars are currently not available, or only with correspondingly long delivery times, which range from five to seven months. The reason for this is that a large number of electric cars were put on the road at the end of 2020 in order to contribute as much as possible to achieving the manufacturers' respective CO2 fleet targets. In addition, it seems that the manufacturers themselves were surprised by the surprisingly high demand and therefore first had to create additional production capacities in their own manufacturing network.

However, it should also be noted that comparable combustion engines, which are configured individually, can have similarly long delivery times. It is therefore important to strive for a fair comparison between the possible alternatives.

Are there currently too few easily accessible charging stations?

The question should rather be, are the charging stations available where people actually charge their e-cars. And at the moment, the answer to this question is probably still a NO. After all, according to several studies, between 80 and 90 percent of e-cars are charged at home. The expansion of the private charging infrastructure has therefore been subsidized accordingly since the end of November 2020. 900 euros per charging point (including installation) are subsidized. The fact that this has been well received is shown by the repeated increase in the funding amount, as well as the fact that around 94,000 funding applications were received in the first week.

Is the production of electric cars more harmful to the environment than that of combustion engines?

At least since the "Sweden Study" published in 2017 and pushed in the media, the life cycle assessment of electric cars has been critically questioned again and again. Although the results of the 2019 study have been largely updated and put into perspective, the production of battery cells in particular requires a high level of energy. If this is not covered by renewable energies, the e-car starts life with a larger CO2 backpack than a combustion engine, various studies show.

However, the entire life cycle of an e-car or combustion engine must be considered in order to make a statement about the climate friendliness of the vehicle. According to a recent study by Eindhoven University of Technology, e-cars have a 50 to 80 percent better CO2 balance over their entire life cycle than comparable vehicles with combustion engines. Drivers of electric vehicles should pay particular attention to charging with green electricity in order to improve the carbon footprint of their own vehicle accordingly.

What about the accusations regarding the lack of sustainability? Particularly when we think about the production of batteries and the extraction of raw materials such as lithium, there is sometimes a lot of criticism. What can we do to counter this?

Once again, it's a matter of looking at the facts and data correctly. It is also important to remember that the industry is striving for corresponding developments to improve sustainability in the mining of raw materials. To put this into perspective, the production of a medium-sized car battery consumes around 3,840 liters of water. By contrast, a single pair of jeans consumes 11,000 liters. In the future, water consumption for lithium production is to be reduced even further. For example, the Chilean chemical company SQM, one of the world's largest lithium producers, plans to reduce its own water consumption by 40 percent by 2030.

What happens to old rechargeable batteries? A prejudice says that they end up in the trash and harm the environment?

Old batteries are not simply thrown in the trash. They are too valuable for that. Simply because of the recyclable raw materials found in lithium-ion batteries. For this reason, both second life use and the recycling of raw materials play a central role in the electrical strategy of many car manufacturers.

To list a practical example of this. In November 2020, VW commissioned its own recycling plant in Salzgitter, where valuable raw materials such as nickel, manganese, cobalt, copper or aluminum are to be recovered and up to 90 percent of the battery is to be recycled. In the long term, VW is even aiming for a recycling rate of 97 percent. Similar steps are also being taken by their market competitors.

Critics claim that the switch to e-mobility will cost jobs and put an entire industry at risk. What is the truth of this?

What is clear is that there will be changes in the labor market. After all, the expansion of electromobility means an upheaval for the automotive industry, but at the same time it opens up enormous opportunities for the sector and the labor market. Whether it is new production sites for vehicle and battery manufacturing, new production capacities or new manufacturing technology requirements, what is needed above all are skilled workers for the development and expansion of innovative key technologies to make an entire sector of the economy fit for the future.

The German eMobility Association (BEM), for example, estimates that 255,000 additional skilled workers will be needed to develop the charging infrastructure by the end of the decade alone. It is therefore quite true that jobs and professions that we know today will be eliminated. However, there will be new job profiles and jobs in the future.