Munich, January 28, 2020: The expansion of charging infrastructure is one of the most important factors that will determine the success of the transportation transition. With this in mind, many European countries are stepping up investments in this infrastructure. Smart charging is resulting in e-mobility becoming increasingly intelligent by, for example, charging electric cars when it makes economic sense to do so or by allowing car batteries to temporarily store electricity for use in the car owner’s home or the power grid. A new white paper produced by the European business association SmartEN (Smart Energy Europe) in cooperation with Power2Drive Europe, the international exhibition for charging infrastructure and e-mobility, sheds light on the latest trends. The topic will also be a key feature of the exhibition itself, which will take place in Munich from June 17 to 19, 2020. One highlight of the event will be the introduction of new smart charging and vehicle-to-grid concepts (V2G). 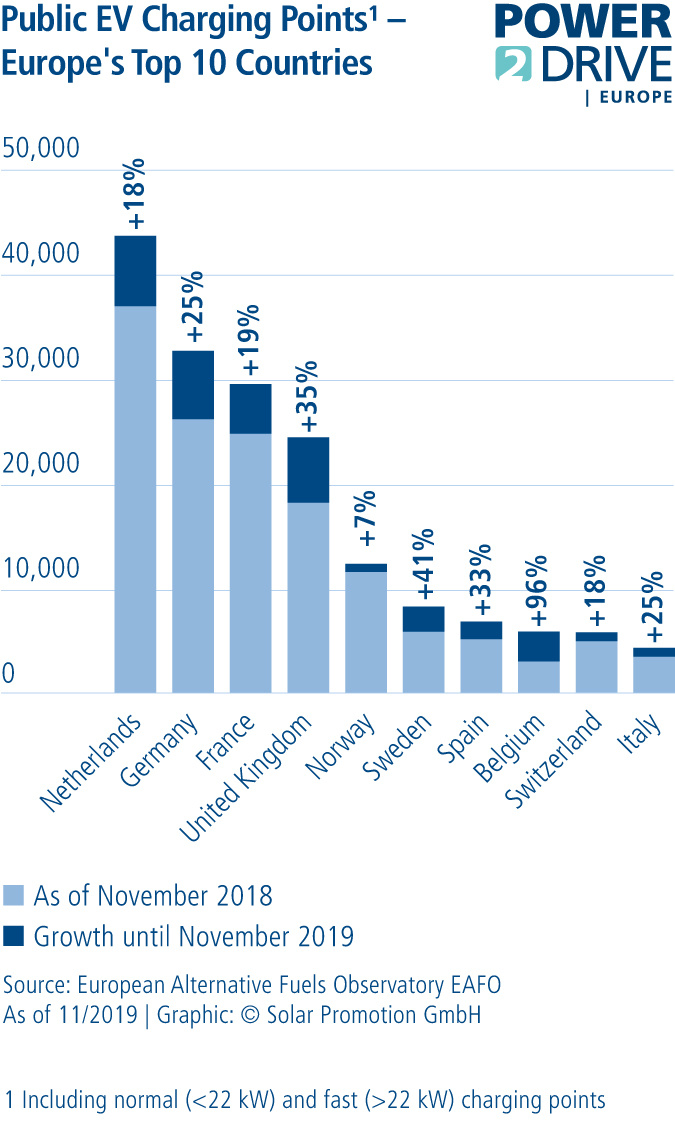 In its latest report, the British market research company IDTechEX predicts that the global market for electric vehicle charging infrastructure will reach a market value of more than 140 billion US dollars by 2029 and will comprise 10 million public and 50 million private charging stations. The increasing number of electric vehicles used in car sharing models is also changing the demand for charging infrastructure. SmartEN has joined forces with Power2Drive Europe to produce a white paper on the topic. “E-Mobility as an Energy Resource – Collection of Best Practices to Drive Regulatory Changes” explores how electric vehicles can be made into an integral part of the power grid and what form EU funding for intelligent public charging infrastructure should take.

The study presents numerous examples of innovative projects by renowned companies in Europe, which demonstrate how we are continuing to move towards a future powered by alternative forms of energy. Another white paper published by SmartEn, “Making Electric Vehicles Integral Parts of the Power System”, outlines how the transition towards clean energy is transforming vehicles from acting solely as means of transport into decentralized sources of energy. Electric vehicles can help to improve system efficiency and integrate more variable renewable energy. “Integrating electric vehicles into the public power grid and extending public charging infrastructure is a challenge that requires a meticulous approach. As part of the run-up to Power2Drive, we are organizing a free webinar for anyone interested in finding out more about the possible forms this integration could take in the future,” says Michael Villa, Head of Policy at SmartEn. The webinar will take place on Thursday, February 06, at 3:00pm.

The Netherlands is currently one of the countries playing a pioneering role in the expansion of intelligent charging infrastructure. The Dutch Ministry of Infrastructure and Water Management recently announced funding for vehicle-to-grid charging stations in the form of a grant worth five million euros, which will support the installation of 472 smart chargers with V2G functionality in 21 Dutch municipalities. These charging stations hold great promise for the future by easing the burden on the power grid, using renewable energy more efficiently and lowering the cost of charging electric vehicles. The first intelligent charging stations will shortly be available for public use. This is an important step because the Dutch government estimates that the number of electric vehicles in the city of Utrecht, for example, will rise to around 12,000 in 2020. A fleet of this size will require more than 1,600 charging points.

Under its Climate Action Programme 2030, the German government is planning to provide financial incentives for electric vehicles, having set itself the target of increasing the number of electric vehicles to between seven and ten million by 2030. It is also planning to fund commercial and private charging infrastructure as part of its “masterplan for the charging station infrastructure,” to help meet the goal of making one million charging stations available by 2030. This will involve projects for the construction of public charging stations being put into action by 2025. However, since the necessary expansion of public charging stations cannot be achieved by state funding alone, the government also intends to enter into discussions with car manufacturers and the energy industry. It is important to be aware that the government is seeking to set up a control center to coordinate the development of charging infrastructure by the federal, state and municipal authorities. This control center will monitor demand-oriented supply and formulate proposals for additional measures.