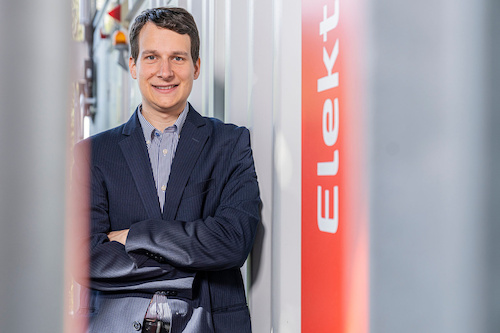 ©Paul Scherrer Institut/Markus Fischer
At PSI, Emmanuele Moioli is investigating, among other things, how the energy supply of households can be made more sustainable in the future.

Researchers at the Paul Scherrer Institute PSI in Villigen, Switzerland, have developed a chemical reactor that uses solar power to mix water and carbon dioxide to produce synthetic natural gas for heating residential buildings. The new system even pays off for certain single-family homes, according to a new study, PSI reports.
The apparatus has two main components: a proton exchange membrane (PEM) electrolyser employs electrolysis to produce pure hydrogen from water. A small chemical reactor generates methane from the hydrogen and carbon dioxide. The waste heat released in the process is used by the reactor itself. It acts as a heat exchanger and directly heats up the water to around 80 degrees for domestic use. The methane produced can be fed into the existing gas network or stored.

In a new study, chemical engineer Emanuele Moioli and his team of researchers have now shown that the apparatus can cover between 20 to 40 percent of the annual energy consumption of a large residential building, depending on its location in Switzerland. To do so, a computer model simulated the system’s use in a large residential structure comprising 64 households over 16 floors, equipped with solar panels on the roof and on the façade, with a total surface of 800 m2.

The technology pays off financially as well

Meanwhile, rising electricity and gas prices are helping to make the system economically attractive as well. “When the study was published before war broke out in Ukraine, prices for electricity and natural gas were still so low that the system would not have been cost effective,” Moioli says. “But since then, the natural gas price alone has almost doubled, to around 12-15 cents per kilowatt hour. This now means our system should already be profitable, assuming a service life of roughly 20 years.”

Moioli’s study was supported by the Swiss Federal Office for Energy through the project ‘Enabling Decentralized renewable Generation in the Swiss cities, midlands, and the Alps’.

Do you want to receive monthly updates on recently published interviews, best practices and industry news? Then sign up for the EM-Power Newsletter!