Munich/Pforzheim, December 16, 2021. E-mobility in Europe is picking up speed – and is racing ahead more rapidly in Germany than in any other European country. One in three electric cars newly registered in 2021 drives on German roads, according to figures for the first ten months of this year (see graphic). The growing international mobility industry will meet from May 11–13, 2022, at Power2Drive Europe in Munich.

Close to 886,000 battery electric vehicles (BEVs) were sold from January through October 2021 in 18 European countries according to a market study from electric car data specialists, Schmidt Automotive Research. That’s equivalent to an 80 percent increase in the number of newly registered fully electric cars compared to the same period in 2020. The largest vehicle market in Western Europe is also in pole position when it comes to the number of newly registered BEVs: 267,000 registration documents were issued in Germany by October – equal to one in every three newly registered BEV in Europe. This marks a rise of 120 percent compared to 2020. Alongside Germany, other large European markets for BEVs are currently the United Kingdom (141,000), France (122,500) and Norway (89,000). Some countries have seen a high increase of newly registered fully electric cars in comparison to the period of previous year – despite lower absolute numbers – for example, in Italy (166 percent, 52,300 cars), Austria (152 percent, 26,500 cars) and Sweden (126 percent, 42,000 cars). Even Finland, where a total of just 7,612 new fully electric cars were registered as of October 2021, has seen a 160 percent increase in comparison to the period of previous year. 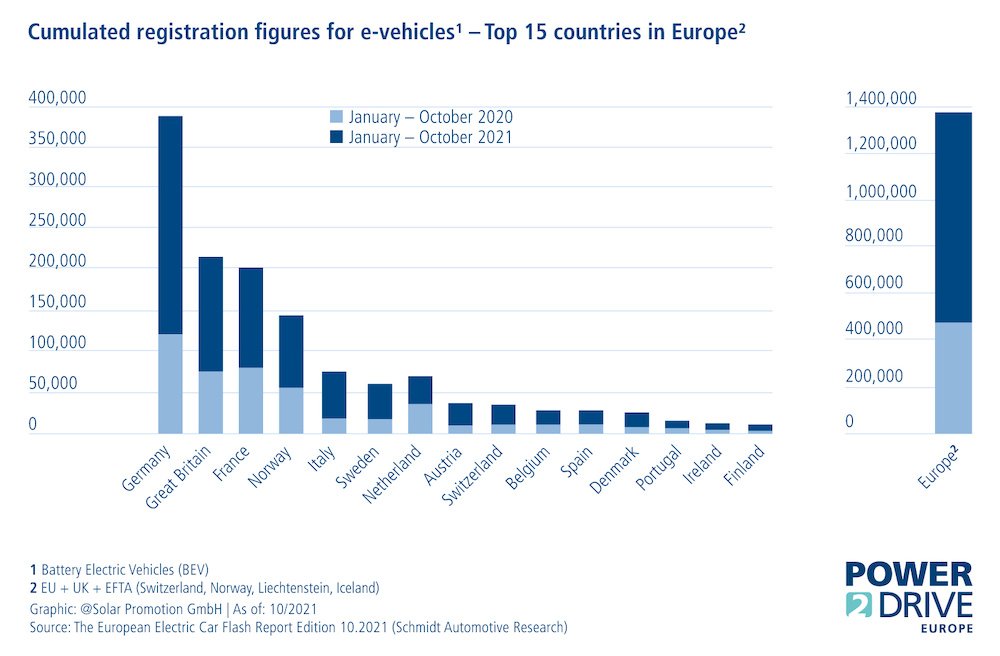 15 million electric cars planned in Germany by 2030
The boom in e-mobility in Germany will continue: State subsidies (such as the innovation premium for purchasing an electric passenger car), enhanced performance and ranges, and the expansion of charging infrastructure will also help the industry drive forward. Head of Tesla, Elon Musk has announced that the first electric cars from the US car manufacturer’s first European factory will drive off the conveyor belt in Berlin as early as December. The new German government has also set ambitious goals: At least 15 million fully electric passenger cars are to be on German roads by 2030. Furthermore, the new coalition agreement sets out to have one million publicly accessible charging stations installed by 2030, the majority of which are to be high-speed charging stations. The new German government wants to improve subsidies for the expansion of charging infrastructure and aims to remove any obstacles in connection with approval processes, network infrastructure and grid connection conditions.

Charging solutions and electric vehicles at Power2Drive Europe 2022
The international exhibition Power2Drive Europe 2022 with its exhibition forum and accompanying Power2Drive Conference will be held in Munich and will help visitors get their bearings in this dynamically growing market. The international exhibition features charging solutions, electric vehicles and mobility services. Manufacturers, suppliers, installers, fleet and energy managers, distributors and start-ups will be able to make valuable business contacts.

Taking place as part of the innovation hub The smarter E Europe together with the energy exhibitions Intersolar Europe, ees Europe and EM-Power Europe, the exhibition puts the intelligent integration of electric mobility in a renewable energy system on center stage. The event showcases ways to intelligently connect the electricity, heat and transportation sectors through the use of renewable energy as well as decentralization and digitalization. Exhibitors – register now here.