Industry generates a lot of exhaust heat that often goes to waste. For temperatures below 200°C, there were previously no cost-effective ways of making use of this heat. The start-up Poligy has developed a heat engine which takes advantage of the fact that Bipolymers – like bimetals – deform when exposed to heat. This drives a generator which produces electricity. 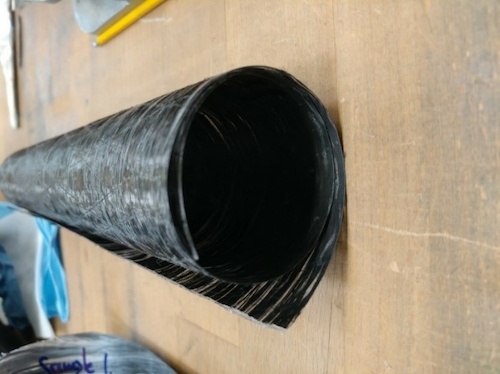 ©Poligy
Bipolymers consist of two joined plastics which undergo different degrees of bending when exposed to heat, just like bimetals.

Many successful businesses are said to have started out in a garage. The German start-up Poligy was born in a kitchen. Co-founder Martin Huber, a business and chemistry graduate, was working at the chemical group Bayer as part of his studies when he realised that if there are bimetals, bipolymers must also exist. “In vocational school, we learned what a bimetal is. I wondered why there wasn’t an equivalent made of plastic. Nobody could explain that to me,” recalls Huber. With his employer’s permission, he took some plastics home with him. “I carried out a few experiments in my oven. The principle worked so well that I filed for a patent in 2015.”

Bimetals consist of two strips of different metals welded together. Each metal has a different thermal expansion coefficient, meaning that it expands a different amount when exposed to heat. The metal with the higher coefficient expands more than the other, causing the welded strip to bend. Huber’s Bipolymers are based on the same principle, but they consist of two different polymers fused together. As polymers can demonstrate a wide range of small and large thermal expansion coefficients, the bending effect can be much more pronounced.

After his successful kitchen experiments, Huber began to consider what his Bipolymers could be used for. “I had already built heat engines and that was something I had always found exciting. So I had the idea of combining these two technologies,” explains Huber. “I built the first prototype at home. It rotated a little to demonstrate the principle.” The Bipolymer strips are arranged like the spokes of a wheel, and the heat deformation effect allows them to drive a generator which produces electricity.

Huber’s development came at just the right time, as the demand is high for affordable and efficient heat engines for low temperatures (below 200°C). These engines could allow power plants, factories and computer centers to convert their waste heat into electricity much more cost-effectively than has been possible to date. And the pressure to make good use of this waste heat is growing. That’s something Huber is sure of, considering the carbon tax and the people taking to the streets to call for climate action. According to a report from the German Energy Agency (dena), process heat is currently the primary source of waste heat in Germany. Experts estimate that it could offer businesses a total 125 TWh of useful heat energy each year, resulting in savings of around 5 billion euros. In a study released in early 2019, the research institute Global Market Insights estimates that the global waste heat market will see turnover rise from 40 billion dollars in 2018 to over 80 billion dollars in 2025. Market revenue in Germany is predicted to reach 5 billion euros by 2025.

To refine, professionalize and market his invention, Huber founded Poligy GmbH together with his partner Artur Steffen in Düsseldorf in October 2018. Huber takes care of technical matters, while Steffen is responsible for the business side of things. The young company now has a staff of 16 and has developed a prototype heat engine. “We’ve made a huge amount of progress, in terms of both the plastic material itself and the engine design. We’re now working on our first industry contract,” says Huber. The customer is a lime kiln near Düsseldorf. Enormous rotary tube kilns operate in the open air at 300°C, without any insulation. “You could get heatstroke just from standing next to them. It’s unbelievable how much heat just goes up in the air,” reports Huber. For the pilot test, Poligy is simply setting up the heat engine next to one of the kilns. Infrared radiation is the simplest and most direct form of heat transfer, but the company is also planning further projects involving warm water and other heat transfer fluids.

“If the pilot phase goes smoothly, we can start serial production next year, with a run of maybe ten pieces. We then want to scale up to mass production in 2022,” announces Huber confidently. The heat engine will be modular. “You can have a machine as compact as one cubic meter or expand it to many times that. It’s very simple to scale up,” he explains. “Our aim is for a module measuring one cubic meter to deliver one kilowatt of electrical power. A module with those specifications would cost around two to three thousand euros.” 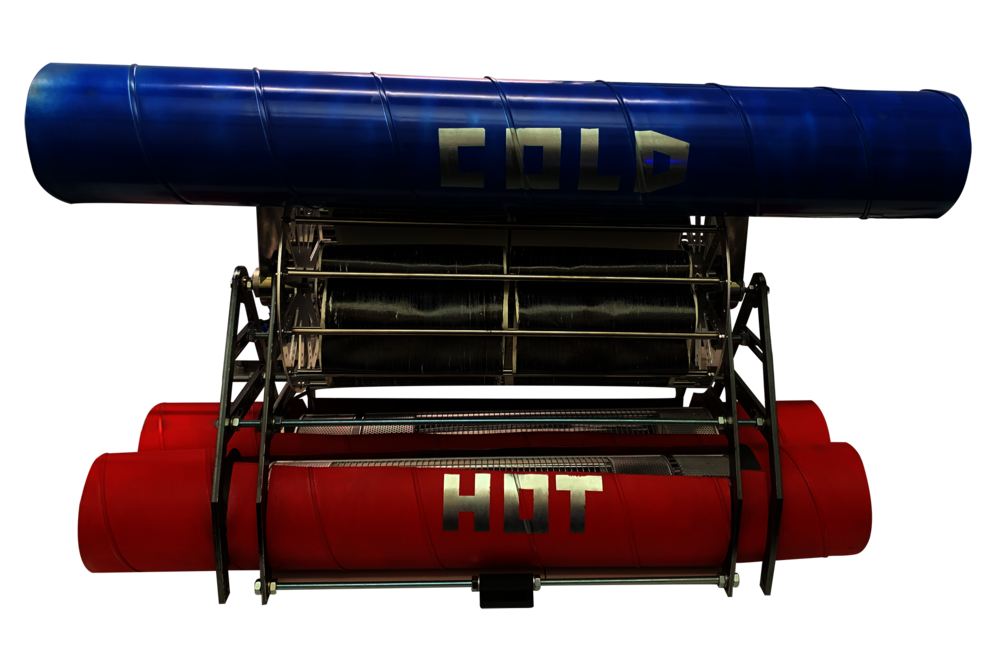 ©Poligy
The heat engine can utilize industrial waste heat to generate electricity. The ideal applications are those which currently require active cooling.

Many different applications are possible, says Huber. “We recently looked at a plant where wood is dried. The hot air is just blown out. That’s 2.5 megawatts of waste heat disappearing through the chimney. And there are plenty more examples of this.” Rotary tube kilns are also common in the cement and steel industry. Huber explains that the waste heat generated in this sector is below 200°C and often below 100°C, which creates particular technical challenges.

“Because the Bipolymer needs a certain temperature difference between the warm side and the cold side in order to bend and straighten, the ideal applications are those where active cooling is currently required. In other words, where energy needs to be used to get rid of the heat produced,” he explains. The heat engine can help users cut both their cooling costs and their power bills, since it puts waste heat to good use. Computer centers are seen as potential customers. “They are very exciting in terms of the application. By 2030, computer centers alone will be responsible for up to ten percent of global electricity consumption, depending which estimate you look at. This electricity is converted virtually entirely into heat which ultimately goes to waste,” Huber explains. The problem is that this waste heat only has a temperature of around 50°C. That makes it difficult to utilize. “But we’re currently working on ways to make use of these low temperatures with our Bipolymer.”

Further improvements to the machine and the plastic will depend on the number of cycles this technology provides – that is, how often the Bipolymer can bend and straighten per unit of time. “We’re currently measuring this process in seconds, but it needs to become even faster,” says Huber. To make this possible, the plastic’s poor heat conductivity must be improved. Poligy also wants to reduce the temperature difference needed between the hot and cold sides of the Bipolymer from the current 80°C to as little as 30°C.

Poligy is supported by many different partners, large and small, including international energy and chemical businesses. Among them is a major utility company based in Düsseldorf. Huber confirms that there is a great deal of interest. That much is also clear from the many prizes that Poligy has already won. A panel of judges from the German Renewable Energy Federation (BEE) recently named the start-up its Renewable Energy Newcomer 2020. In 2018, the company won prizes including the Handelsblatt Future Materials award as well as the international Chem Startup Award in the new materials category at StartupCon. It was also included on the Start Up Energy Transition (SET) Top 100 list of the most important energy start-ups worldwide.

In the coming years, Poligy wants to hit the ground running and begin large-scale production and installation following successful testing of the pilot plants. The company will have plenty to do, and not just in Germany. Huber has already taken his idea around the world, showing particular interest in the Japanese market. “Japan is exciting because of the geothermal energy available. It could be enough to power the whole country. There’s also significant interest and excellent funding. We’re holding regular discussions with our contacts over there.” 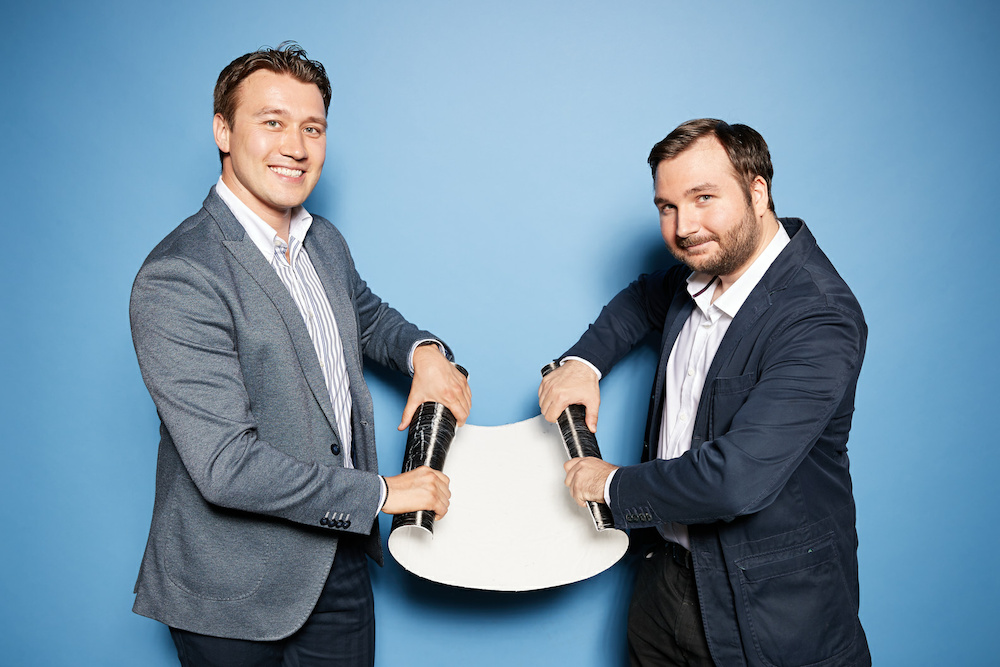 ©Poligy
Martin Huber and Artur Steffen seek to make waste heat below 200°C usable and profitable with their start-up Poligy.
All news