Munich/Pforzheim, January 25, 2022: Intersolar Europe, the world's leading exhibition for the solar industry, welcomes plans for a solar industry acceleration package which was recently announced by German Federal Minister for Economic Affairs and Climate Action, Robert Habeck. Thanks to the goals set by the newly appointed German government to reach an installed PV capacity of 200 gigawatts (GW) by 2030, Germany continues on its path to becoming the leading PV market in Europe. The international solar industry will meet on May 11–13, 2022, at Intersolar Europe in Munich.

The newly appointed German government aims to increase the share of renewable energies from around 45 percent as it currently stands to 80 percent of the gross power consumption by the year 2030. Its plans to expand installed photovoltaic (PV) output to around 200 GW by 2030 are met with particular encouragement from the world’s leading exhibition for the solar industry. Additionally, the government hopes to quickly break down all market barriers and accelerate grid connections as well as certification, planning, and approval procedures. Carsten Körnig, CEO of the German Solar Association (BSW) explains that, “The new German government appears to have recognized that solar energy is crucial to unlocking a solution for the climate crisis. The industry has high expectations for them and hopes for a rapid solar energy roll out in Germany.”

International PV industry to meet in Munich in May 2022
Solar energy is central to reaching climate targets across Europe. Now it is beginning to make its comeback in Germany and is once again gaining momentum with the plans laid out by Robert Habeck at the government press conference. In May 2022, Intersolar Europe, as part of the innovation hub The smarter E Europe, will take to the stage right on cue: “The new German government is ambitious when it comes to climate and environmental protection. That means that the solar industry and the entire new energy world are getting the attention they deserve,” says Markus Elsässer, CEO of Solar Promotion GmbH. The organizers of the world’s leading exhibition for the solar industry can feel how dynamic the market has become – over 90 percent of the exhibition space at The smarter E Europe 2021 has already been booked. “Those who want to experience trends, developments, business models and innovation first hand, and meet the key players of the industry should book their spot in Munich from May 11–13, 2022,” adds Daniel Strowitzki, CEO of FWTM GmbH & Co. KG. He continues, “Intersolar Europe 2022 will be the place to be to meet, deepen knowledge and do business.” 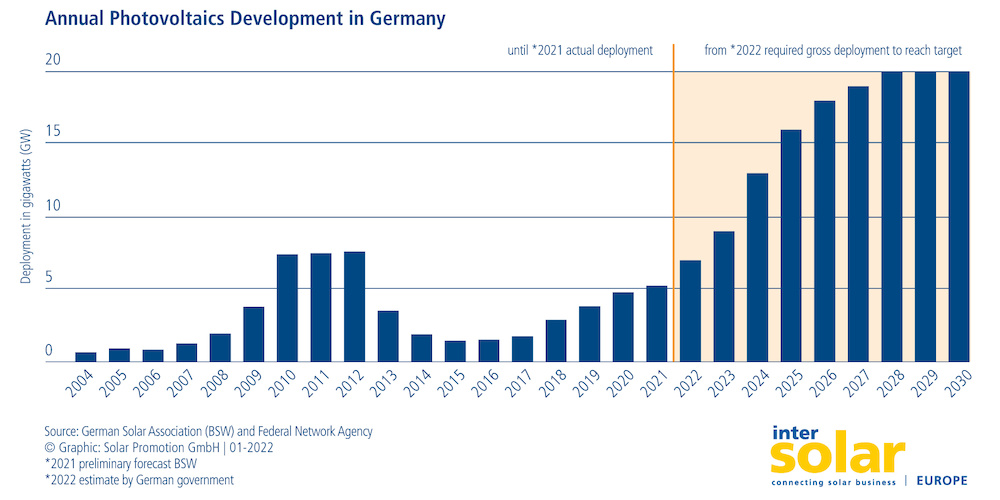