Pforzheim, June 30, 2020: This year, innovative business models and pioneering projects for a sustainable energy industry have once again been honored with The smarter E AWARD. Phaesun GmbH, Solar Chernobyl LLC and SunPower Corporation impressed the panel of judges with their pioneering efforts and were crowned the winners of the Outstanding Projects category. The prize for Smart Renewable Energy went to Stadtwerke München GmbH, Fronius International GmbH and Next Kraftwerke GmbH. Since The smarter E Europe 2020 was canceled in light of the coronavirus pandemic, this year’s prizes were presented at an online AWARD Ceremony held on June 30 – along with the Intersolar AWARD and ees AWARD. 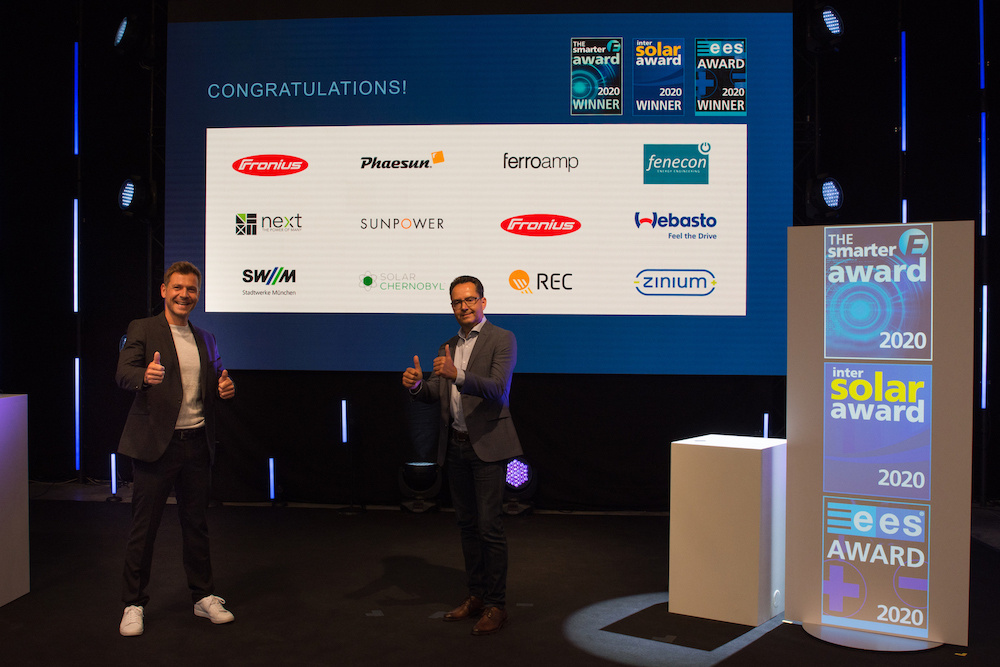 This year, companies and project owners were once again rewarded for their pioneering solutions with the most important innovation prize in the energy industry, The smarter E AWARD. Projects completed in the areas of solar, storage, e-mobility and energy management took center stage in the Outstanding Projects category. The Smart Renewable Energy category celebrated solutions for sector coupling and smart management of solar installations in combination with other systems that produce and consume energy. On June 30, 2020, the winners of The smarter E AWARD were honored in a live-streamed virtual AWARD Ceremony with an international audience.

Winners in the Outstanding Projects category

Headquartered in the German city of Memmingen, Phaesun specializes in off-grid photovoltaic technology. As part of the REvivED Water Innovation and Development Project, Phaesun has developed the first small-scale solar-powered electrodialysis desalination system on the market for purification of brackish water. It has achieved this by working with a group of interdisciplinary partners, ranging from architects to universities and startups. The system provides up to 2,000 liters of clean drinking water per day for isolated villagers and nomads in Somaliland. Electrodialysis uses a membrane technology: An electric current pulls salt ions through an ion exchange membrane, thereby significantly reducing the salt content. It is very well suited for providing a solar-powered drinking water supply, especially in remote areas.

The jury admired the cost-effectiveness and low-maintenance aspects of this solution, along with its high impact and demonstrated repeatability in rural Africa and India where there is a lack of pure drinking water.

The Solar Chernobyl 1 megawatt power plant is a project of the Ukrainian-German consortium Rodina-Enerparc. Rodina specializes in renewable energy projects in Eastern Europe, the former USSR, and the Middle East. Enerparc designs, constructs, and operates solar power plants in Europe, Asia and the USA. The Solar Chernobyl plant is located on the contaminated site of the Chernobyl nuclear power plant, with only a small distance of 100 meters from the reactor that exploded in 1986. As the only privately-invested project in the Chernobyl zone since then, this is a unique example of the redevelopment of radioactively polluted land, turning it into a positive example of the safety and capability of solar power and demonstrating its benefits for a post-nuclear energy world. To reduce radioactive leakage from the soil, the system was designed with low maintenance in mind and installed with ballasts set on the surface.

The jury recognized the symbolic and practical importance of installing a utility PV power plant at the site of one of the most dangerous nuclear accidents in history, paving the way for Ukrainian energy independence.

The SunPower Corporation is a part of the Powerhouse Team collaborative that has joined forces to solve climate problems – and the company designs and manufactures crystalline silicon photovoltaic cells and solar panels. Its most recent building is the world’s northernmost energy-positive structure, Powerhouse Brattørkaia in Norway, built only three degrees south of the Arctic Circle. SunPower contributed its Maxeon solar technology, which has strong wind-load resistance and – over a time of 25 years – generates up to 35 percent more energy than conventional panels. The multi-story building produces power for its own use, and contributes any excess power to the local microgrid.

By bridging the gap between architecture and the solar industry, this solution demonstrates how function can dictate form and it proves the viability of solar power so far north. It was rewarded by the jury for its lighthouse character – setting an example for responsible construction for the future with an energy positive 60-year-life span from cradle to grave.

Munich City Utilities “Stadtwerke München” is an energy and infrastructure services provider in Bavaria’s capital city. Their photovoltaic project M-Solar Sonnenbausteine is a business model for urban energy transition that provides a chance for all citizens to participate in solar energy: The roofs that are used for the installation of solar panels are not restricted to private residences. “Sonnenbausteine,” or “solar building blocks,” are installed on roofs throughout the city, if the respective citizens invest as little as 500 euros. Based on a self-service online platform, this crowd- funded project returns energy and interest to the contributing citizens.

The jury commended this exemplary bottom-up solution, as it helps the community participate in local renewable energy. This decentralized lighthouse project demonstrates that everyone can contribute to adding green electricity to the local energy-mix – and that climate protection in urban areas can be achieved as a collective group.

Fronius International is a global company based in Austria. It develops technologies for converting and controlling electrical energy, which are fit to solve contemporary technical challenges. The Fronius Solhub is a decentralized energy hub that allows production, storage, and utilization of green hydrogen wherever it is needed – and whether it might be for transportation or for seasonal energy storage. By utilizing hydrogen, it is possible to couple the sectors power, mobility, and heat, and to store large amounts of energy over a long period of time. Solhub focuses on medium-sized customer companies that want to produce their own fuel with support of renewable energy resources that are locally available.

The jury was impressed by the pioneering complete system that is modular, scalable, and turn-key ready. Solhub brings solar energy to a fueling station and illustrates the growing importance of chemical energy carriers, particularly for heavy-duty and long-range transport applications as well as for industrial use.

Based in Cologne, Germany, Next Kraftwerke is a virtual power plant operator and power trader, connecting power-producing assets from renewable sources with commercial and industrial power consumers and power-storage systems. They have developed the software-as-a-service solution NEMOCS to support third parties in establishing their own virtual power plants. NEMOCS can connect thousands of decentralized units to optimize their operations by processing data in real time – that can improve generation forecasting. With NEMOCS, it is possible to monitor, forecast, and dispatch a distributed pool of assets from a single control center. This improves the performance of the pool of assets and the overall performance of the whole system.

The jury applauded this concept: It makes renewables more economical, it promotes their expansion, and it proves that renewables can meet the needs – and take on an increasing share – of the future energy market, including shouldering system responsibility.

The smarter E is now open 365 days a year

As a platform for the new energy world, The smarter E concentrates on sharing information on energy industry topics and providing a networking opportunity for global industry players – now with a number of additional digital formats. The portfolio of the innovation hub and its four energy exhibitions Intersolar, ees, Power2Drive and EM-Power includes not just virtual award ceremonies, but also podcasts, webinars, innovation days, digital conferences and other online events. For more information, please visit www.TheSmarterE.com.

Further information on the awards can be found at: