Pioneering solutions to ensure the energy future have become more important than ever. Whether it is renewable power and heat generation technologies, innovative storage systems, smart grids, charging infrastructure or e-mobility: Promising solutions for renewable, decentralized, digital and reliable power supply and the coupling of the electricity, heat and transport sectors are conquering the market.

The video gives you an insight into the highlights of Intersolar Europe 2022.

Together with Messe München, we are working on a health and safety concept, which enables all participants a secure exhibition and conference participation.

The EnerOne battery storage system, the STABL SI 100 modular multi-level converter and the Voltfang Industrial commercial storage system made from second-life car batteries are all examples of innovative products within the storage industry.

Munich/Pforzheim, January 19, 2022: The smarter E Europe, the continent’s largest platform for the energy industry, welcomes increased efforts promoting green hydrogen, as recently announced by Robert Habeck, Federal Minister for Economic Affairs and Climate Action in Germany. Relevant subsidies, infrastructure and procurement have the potential to turn Germany into the “hydrogen hub” of Europe. This is why our innovation hub will put green hydrogen center stage from May 11–13 in Munich.

“Robert Habeck, the minister for economic affairs, has realized that a fast and ambitious acceleration of a green hydrogen market economy is urgent and must be pushed,” says Werner Diwald, Chairman of the German Hydrogen and Fuel-Cell Association DWV. Planned subsidies will overcome investment obstacles that have been holding the industry back. The smarter E Europe, in cooperation with DWV, has been advocating hydrogen produced from renewable energy for over two years and can provide important input on how to best promote this source of energy.

“In October 2021, at The smarter E Europe Restart, I claimed that we were about to embark on a hydrogen market economy, and what the new government is planning has brought us much closer to this step,” explains Diwald. According to him, green hydrogen not only brings incredible opportunities for European industries but is also an entire system integrator at the core of the energy transition. Diwald: “We have high hopes for the new government to pave the way for this source of energy in Germany through regulations.”

International hydrogen economy will get together in Germany in May
The next The smarter E Europe, taking place from May 11–13, 2022, will once again put green hydrogen center stage. The smarter E – Green Hydrogen Forum, which will be held during the exhibition, will provide industry representatives along the entire value chain an opportunity to showcase their solutions. Businesses looking to bring hydrogen, fuel cells, electrolysis and Power-to-Gas into the market will be meeting at the Green Hydrogen Forum & Expo.

From efficient energy generation and storage to distribution to consumption, The smarter E Europe covers the entire range of energy industry topics. It includes the energy exhibitions Intersolar Europe, ees Europe, Power2Drive Europe and EM-Power, all of which can be attended with a single ticket. Each of the energy exhibitions has a distinct professional focus, and by organizing all of them at the same time, the links between products and topics – which are so crucial for the energy sector – are mapped. 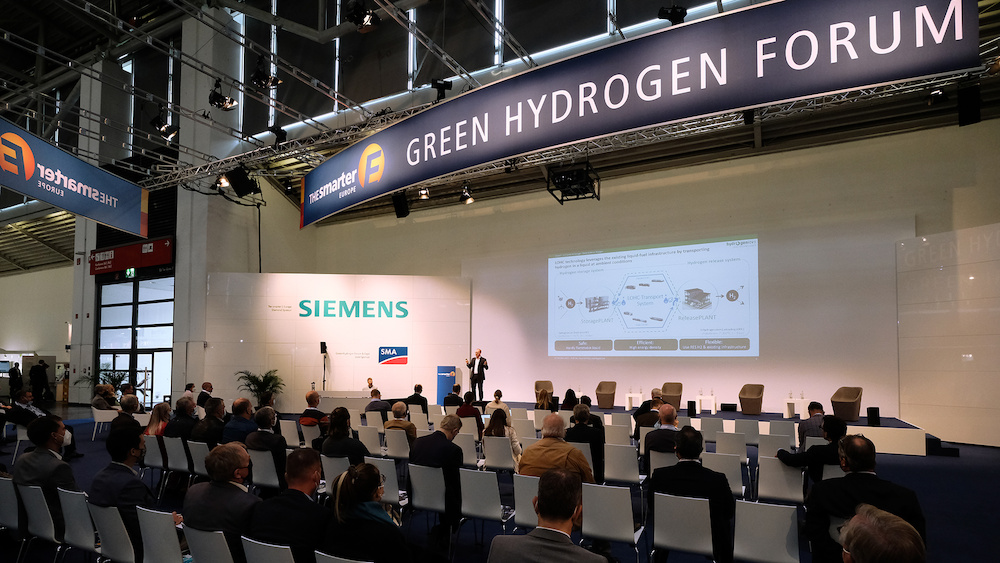 After three successful exhibition days and two conference days at the International Congress Center München (ICM) which provided intensive discussions, captivating debates and product innovations, Intersolar Europe, the world’s largest exhibition for the solar industry, can look back on a successful event.

Political developments in recent months have demonstrated the need for a secure and independent energy supply for Europe. The success of the energy transition is linked to the accelerated introduction of a green hydrogen economy, in addition to the increased expansion of renewable energies.

The markets for small-scale photovoltaic systems and electric cars are growing quickly. A recent EUPD Research analysis reveals how an acquisition of a solar system can foster the purchase of an e-car.

Use the online application to book your booth comfortably.