Photovoltaics is booming in Europe, with around 18.7 gigawatts of new capacity installed last year. In addition to rooftop and ground-mounted solar module installations, the development of new areas of production – such as on façades, artificial bodies of water and fields – is key.

Sascha Lindig works as a researcher at EURAC in Bolzano/Italy, where he is currently completing his doctorate in cooperation with the University of Ljubljana/Slovenia as part of the H2020 Marie-Sklodowska-Curie Solar-Train project. His studies focus on statistical models for the quantification of the degradation of PV systems, degradation patterns and the economic evaluation of technical failures in PV systems. He first studied photovoltaic and semiconductor technologies at the University of Applied Sciences in Jena/Germany and then environmental and energy technologies at the HTWK Leipzig/Germany, where he received his Master of Engineering in 2014.

When it comes to green hydrogen, Germany is the most attractive market in Europe. Thanks to the political support, the strong industry demand for hydrogen and the growing share of renewable electricity generation, the country is at the forefront of the burgeoning hydrogen economy.

After his studies in energy engineering, Cyril has been working with Franz Baumgartner in PV system research at the Institute of Energy Systems and Fluid-Engineering since 2019. Main focus of his research is laboratory testing of PV system components, where he examines the efficiency of PV inverters, the performance of module-level power electronics and transients of battery systems. His activities further include the simulation of PV performance in shaded conditions and heat pump - PV control strategies.

Digitalization is Opening up New Opportunities

Last year, Germany lost a record amount of almost 6.5 billion kWh of electricity that could have been generated from renewable sources of energy by plants whose activities had to be capped to avoid overloading the power grid. The total cost for the grid and system safety precautions amounted to 1.2 billion euros. 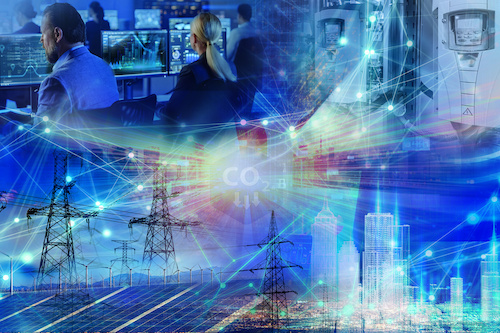 The share of volatile electricity continues to grow due to the new deployment of photovoltaic installations and wind power sites. How renewable energies can be better integrated into our distribution grids is therefore one of the most important questions of the energy transition. Many solutions are based on intelligently connecting the energy infrastructure. Smart grids enable communication between decentralized energy sources, storage systems and prosumers. By balancing out the supply and demand, they help to utilize power grids to their full capacity.

Digitalization of the energy supply is therefore a major growth market. According to figures from the International Energy Agency, the global investments in smart meters alone – the centerpiece of a smart grid – have almost doubled, increasing from 11 billion US dollars in 2014 to 21 billion US dollars last year. Alongside the urgent need to make a success of the energy transition, digitalization also brings new prospects and areas of business for the energy industry. In the Stadtwerkestudie 2020, a study of municipal utilities, over 79% of the surveyed municipal utilities named digitalization as the main factor driving the maximization of their potential for efficiency and growth.

According to the study published by the German Association of Energy and Water Industries (BDEW) together with Ernst & Young, the utility companies ranked smart metering (81%) and cybersecurity (75%) as particularly relevant digital technologies. As the international exhibition for energy management and integrated energy solutions, EM-Power Europe plays an important role in this dynamic market and now boasts an expanded portfolio. Smart grids and the integration of renewable energies, grid infrastructure and system services are now also part of the picture. Decentralized and renewable energy supply, smart building automation, energy management systems within microgrids, districts and buildings as well as commercial and industrial energy services remain an important part of the exhibition. As part of The smarter E, EM-Power Europe has established itself as the interface between a sustainable energy supply and the efficient distribution and use of electricity and heat.

The public charging infrastructure in Europe continues to grow rapidly - by 35 percent in 2020 compared to the previous year.

Professor Erik Stensrud Marstein is chief scientist at the Department for Solar Power Systems at the Institute for Energy Technology (IFE) in Norway, director of the Research Center for Sustainable Solar Cell Technology (FME SUSOLTECH), as well as adjoint professor in solar cell technology at the University of Oslo. He has been working at IFE in R&D in the field of PV since 2003. Most of his research has been performed in close collaboration with industry partners.

Postponement of The smarter E Europe 2021

The smarter E Europe with its four exhibitions Intersolar Europe, ees Europe, Power2Drive Europe and EM-Power Europe will be moved back by six weeks to the second half of 2021.

Here you find the exhibition site plan for The smarter E Europe 2021, in Munich.