Share your expertise and present at the conferences or exhibition forums of The smarter E Europe! The Call for Abstracts Center ist open until January 28, 2022.

Munich/Pforzheim, February 11, 2021 – Photovoltaics (PV) is booming in Europe, with around 18.7 gigawatts of new capacity installed last year. In addition to rooftop and ground-mounted solar module installations, the development of new areas of production – such as on façades, artificial bodies of water and fields – is key. Agrivoltaics involves the use of agricultural land to produce food and generate solar energy simultaneously. Conventional free-standing installations can also provide a valuable habitat for flora and fauna, which in turn promotes the acceptance of both the installations and the energy transition as a whole. Find out more about new developments and potential applications for PV at Intersolar Europe, the world’s leading exhibition for the solar industry, and the accompanying Intersolar Europe Conference. Both events will be held as part of The smarter E Europe from July 21 to 23, 2021, at Messe München. 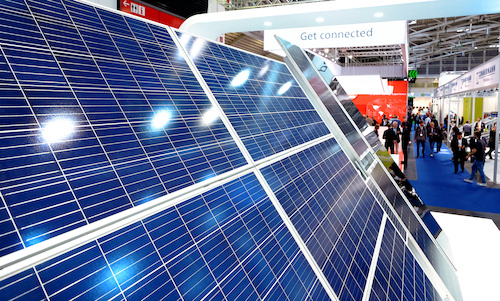 The European PV market is experiencing dynamic growth. The industry association SolarPower Europe reports that the European Union (EU) saw an eleven percent increase in PV capacity last year, with 18.7 gigawatts (GW) of newly installed capacity. This made 2020 the industry’s second best year, topped only by 2011. The strong growth of PV is also reflected in the total amount of power generated in the EU. 2020 marked the first time that the EU generated more power from renewable sources than from fossil fuels, according to a study by Agora Energiewende and the British think tank Ember entitled The European Power Sector in 2020. Renewable energies made up 38 percent of the European energy mix in 2020, compared with fossil fuels making up only 37 percent.

In Germany – by far the EU’s largest PV market – 4.8 GW of solar capacity were added last year, and renewable energies accounted for more than 50 percent of net public electricity generation, i.e. the energy mix that actually comes out of the socket. However, market researchers warn of a potential gap in the German energy supply as early as 2023. To ensure supply security and achieve climate targets, the current rate of photovoltaic expansion must double by 2021 and triple by 2022. In the interest of promoting photovoltaic expansion and using space efficiently, solar modules are no longer limited to rooftop installations and free-standing systems. In the future, modules on façades, agrivoltaics and floating PV could open up even more production areas, making them an additional driver of photovoltaic growth.

Photovoltaics above, photosynthesis below

Agrivoltaics is a method for the shared use of agricultural land for food production and PV power generation. It improves land use efficiency by allowing for the expansion of PV power generation while also preserving arable land for agricultural use. Photovoltaics and photosynthesis are no longer in competition, but rather complement one another. In light of the dynamic global growth of PV and the associated increase in the land area required for PV installations, innovative concepts such as agrivoltaics support the transformation of the energy system through the dual use of agricultural land.

According to the Fraunhofer Institute for Solar Energy Systems ISE, agrivoltaics technology has made significant progress in recent years and has spread to nearly every region in the world. The agrivoltaics capacity installed worldwide has grown from around five megawatts (MW) in 2012 to
approximately 2.9 GW in 2020, with China producing the greatest share of installed capacity at around 1.9 GW. As climate change leads to increasing droughts and extreme weather events, agrivoltaics offers multiple advantages: zero-emission solar power plus food production plus the protection of crops from drought and damage caused by extreme weather such as hail or strong rain. By partially shading agricultural areas, the solar modules reduce the rate of evaporation and can also replace expensive hail netting and polytunnels.

PV installations reduce the need for irrigation by providing shade

In remote, off-grid areas, agrivoltaic power can be used to supply and treat water, while also reducing the crops’ need for water through shading. This counteracts the trend toward desertification and soil degradation. The world’s largest agrivoltaics installation has been built on the edge of the Gobi desert in China, where berries are being cultivated underneath solar modules with an output of 700 MW. A preliminary study by Fraunhofer ISE at a site in the Indian state of Maharasthra showed that shading provided by agrivoltaic installations and the associated reduction in evaporation can boost tomato and cotton yields by up to 40 percent.

A number of challenges stand in the way of widespread use of agrivoltaics, including higher investment costs in comparison to conventional free-standing PV installations due to the support systems used for the modules as well as the need for site-specific system design. However, according to Fraunhofer ISE’s October 2020 guideline on the opportunities agrivoltaics opens up for agriculture and the energy transition, agrivoltaics is already competitive with other renewable energy sources today. At seven to twelve euro cents per kWh, agrivoltaics offers levelized electricity production costs that currently remain higher than those of traditional free-standing installations, but are already below those of small rooftop PV systems.

Free-standing installations provide a valuable habitat for flora and fauna
Conventional free-standing photovoltaic installations can also provide a valuable habitat for flora and fauna. Extensive care provides protection to nutrient-poor soils, creating important biotopes for plants and insects, which in turn increases the availability of food for birds and bats. The interest group Triesdorfer Biodiversitätsstrategie – Biodiversität auf PV-Freiflächenanlagen (Triesdorf Biodiversity Strategy – Biodiversity on Free-Standing PV Installations), was recently founded to promote biodiversity in solar parks and with it public acceptance of these installations and the energy transition as a whole. In addition, the German Federal Environmental Foundation (DBU) is currently having certification standards developed for evaluating the product quality of renewably produced electricity with regard to environmental and social criteria.

Agrivoltaics at Intersolar Europe and its accompanying conference
Visit Intersolar Europe from July 21 to 23, 2021, at Messe München to learn more about developments, products and applications in the areas of photovoltaics solar thermal technologies, solar power plants, grid infrastructure and solutions for the integration of renewable energies. Manufacturers, suppliers, distributors and service providers will all gather at the solar industry’s most important meeting point to present their products and innovations. At the accompanying Intersolar Europe Conference, experts will be on hand to shed light on innovative concepts and the associated technologies as well as previous experiences and future prospects as part of the sessions “Agrivoltaics: Harvesting the Sun While Cultivating Crops and Vertical Farming” and “Renewables: The Nexus of Water, Energy, and Food.” This year, Intersolar Europe is also providing support for the international AgriVoltaics2021 conference for the first time, emphasizing the importance of this topic. The online event will be held from June 14 to 16, 2021, and is geared toward anyone who is interested in gaining deeper insight into the world of agrivoltaics.

From the Idea to the Ready-to-Use Charging Station

The availability of charging options at home, during work or at leisure locations has a significant impact on how the market share of e-cars can grow.

Manufacture of Photovoltaic Products in Europe is Becoming More Attractive

The rising demand for photovoltaics and decreasing costs are making the manufacture of photovoltaic products in Europe attractive.

When it comes to green hydrogen, Germany is the most attractive market in Europe. Thanks to the political support, the strong industry demand for hydrogen and the growing share of renewable electricity generation, the country is at the forefront of the burgeoning hydrogen economy.

Due to the pandemic, The smarter E Europe and its four concurrent energy exhibitions Intersolar Europe, ees Europe, Power2Drive Europe and EM-Power Europe will no longer take place from July 21–23, 2021.

While the Covid-19 pandemic has slowed down the growth of many industries, the new energy world has been an exception to the rule: The European photovoltaics market is booming, demand is surging.